# What are Secrets and why are they important?

Systems like layline.io by their nature of what they are good at (hint: interfacing ...) usually need to handle Secrets such as usernames, passwords, API-Keys etc. Some of these Secrets can be extremely sensitive.

When working with Secrets as part of a Project, there are always some risks in them being exposed, especially in software and configuration exercises where Secrets may end up in clear text more often than not, and for lack of better mechanisms. Examples:

# How to best deal with Secrets in Development and Configuration environments

The only valid answer to address these challenges is that Secrets must be truly secret in the process as early-on as possible. At best, only very few trusted staff know the Secrets and have a way to make them part of the process, without exposing them.

Public/private key-pairs support a model in which Secrets can be encrypted by anyone early on, but only decrypted by the private-key holder. layline.io embraces this model to take care of Secrets and ensure that the exposure of Secrets is kept to a minimum at all times.

In layline.io key-pairs can be created either on the Configuration-Server or the Reactive Cluster. They can also be imported if there are existing key-pairs which should be reused.

The following image gives an overview: 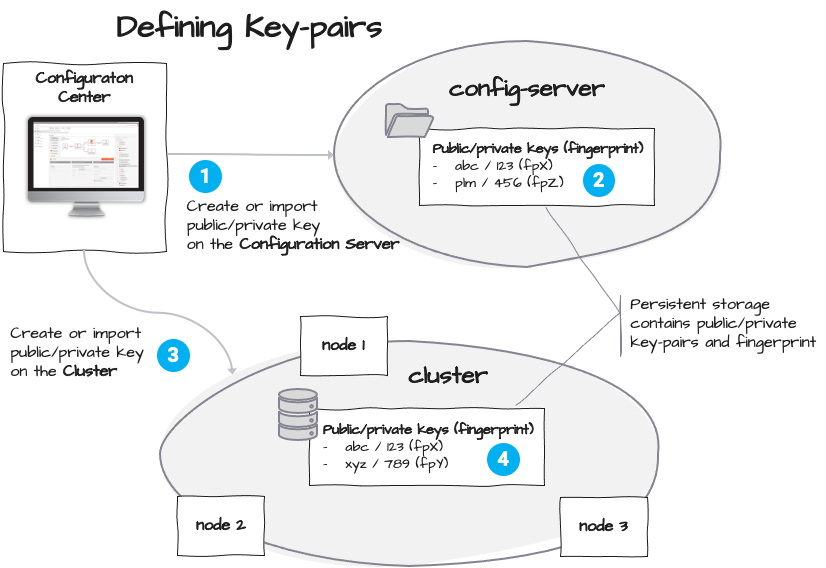 The above image depicts how Secrets are defined. As mentioned before, layline.io supports the standard public/private-key concept to secure Secrets. The key-pair can either be imported from an external source, or created from within the Configuration Center (1) and (2). Depending on where we want the key-pair to be stored, it is then either stored on the Cluster (3) or on the Reactive Engine (4). Part of the key-pair is a fingerprint which is automatically generated. In the above example two key-pairs are stored on both the Configuration Server and on the Reactive Engine. Please note, that the keys with fingerprints fpZ and fpY are exclusive to their storage, and the key with fingerprint fpX is common. This will become important as we move along with the explanation.

The advantage of creating key-pairs on the Configuration Server is that encryption is possible without a Cluster present (which may hold key-pairs as well). The encryption can be the same as on the Cluster (same key-pair) or using a different key-pair than on the target Cluster. In the latter case the encryption can be translated upon deployment, as we will learn later.

Storing keys on the Reactive Engine Cluster is a necessity if you plan to deploy Workflows to the Cluster which make use of Secrets. In that case the secret values need to be decrypted on the Cluster upon execution. This requires that it is aware of key-pairs with matching fingerprints. We will explain this in more detail below.

# Creation of Key-Pairs on the Configuration Server:

To create key-pairs on the Configuration Server navigate to Settings (1) --> Key Storage (2). On the right-hand panel you will see the existing key-pairs (3).

If you haven't already defined a key-pair, a key-pair by the name of "DefaultKey" will be automatically created for you (4).

Public/private key-pairs can be created in three ways: 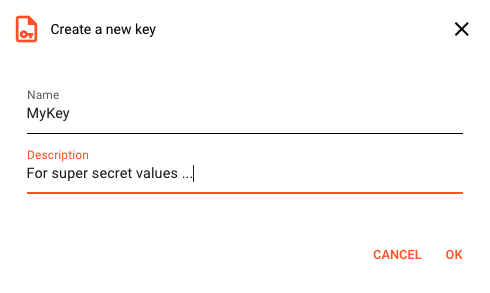 Enter a name and description. The new key will be created on the Configuration Server. The key-pair itself will not be presented back to you. A fingerprint identifying the key-pair is automatically generated. The fingerprint is later used to match encrypted values to the correct key-pair. The fingerprint itself also contains the public key.

It is possible to import a key-pair which was created externally by ssh-keygen (opens new window) or compatible mechanisms and is in a file. Select Import a Key. A dialog will open: 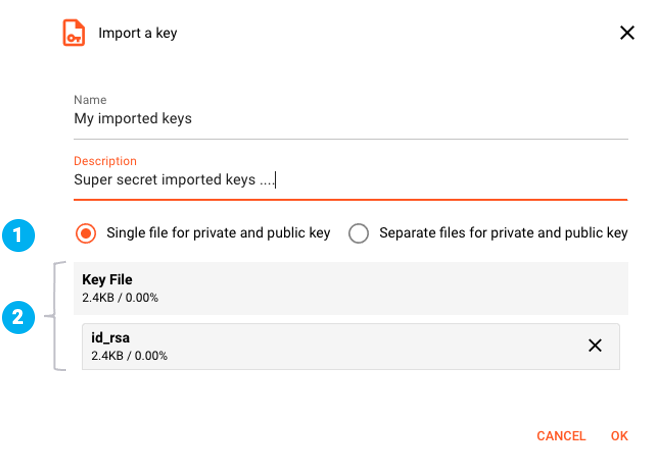 Enter a name and description for the new key-pair. Select whether your key-pair is in one file or in separate files (1). The example above uses one file which contains both public and private key for import. You can either drag and drop the file(s) onto the respective landing-zones in the dialog (2), or select them by hitting the "+"-key in the landing-zone. Click OK to accept.

You should have a new entry in the list of keys (1):

layline.io supports to copy a key-pair. This is useful to copy a key-pair from a Configuration Server to a Reactive Engine Cluster, or vice versa. To copy click the copy button next to the key-paid. To past click Paste Key. If a key-pair is in your clipboard (kept in layline internal format), it will be pasted and inserted.

# Creation of Key-Pairs on the Reactive Engine Cluster

Find the correct interface under Operations (1) --> Cluster (2) --> KeyStorage (3). Make sure you have selected the correct Cluster (2) The "Controller" (4) which Cluster node is currently responsible for the Key Storage. Under "Keys" (5) you will find existing keys and can manage them.

The management of the key-pairs is exactly the same as with the key-pairs in the Configuration Server, except that it all happens on a Cluster. To learn how to create or import a key please refer to here.

In the context of configuring a Project (1), you may also configure "Secret Assets" (2) which then hold such Secrets. In the image, two Secrets Assets "A" and "B" have been defined. Each one contains a configured secret. 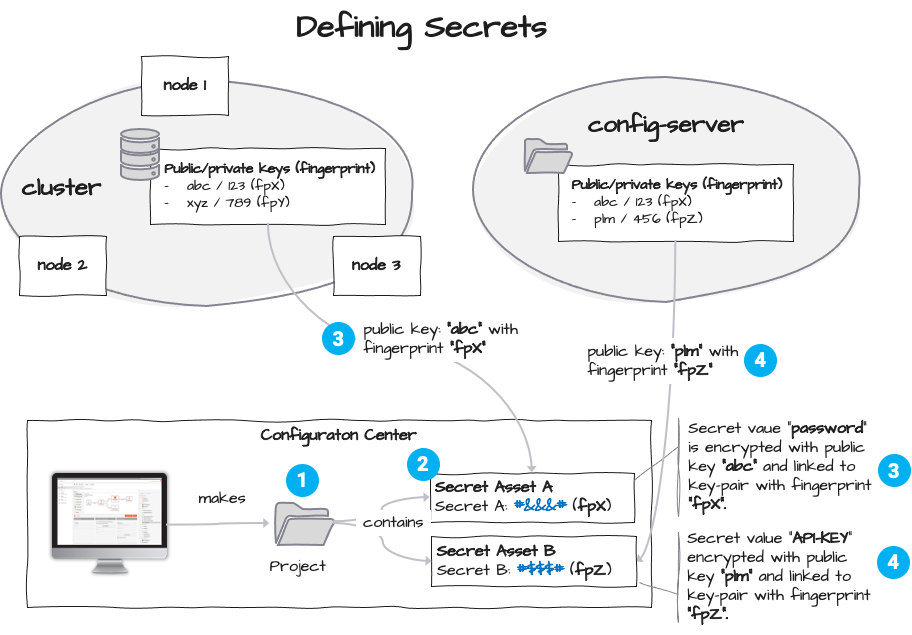 To create a Secrets Asset as part of a Project navigate to Assets, select Resources in the tree and then add a new Secret Asset (2) or (3): 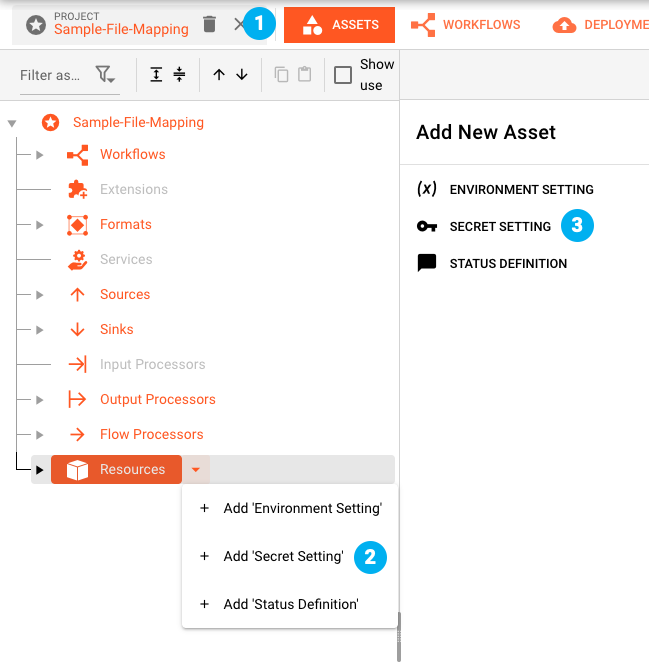 A new Secret Asset is created: 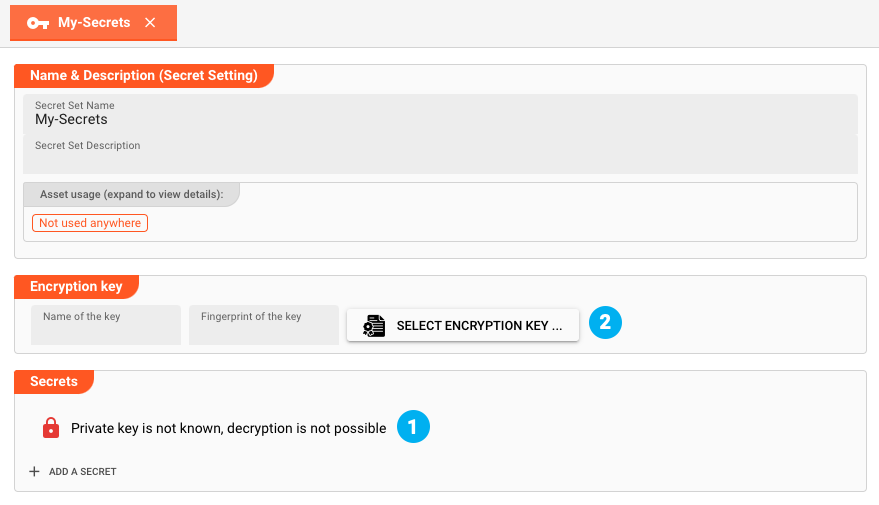 To assign a key-pair click Select Encryption Key (2). A dialog will open.

On the left side you can see all available Clusters, including the Configuration Server on top of the list (1). Selecting one of the entries in the list will show the known keys on that respective entity (2). You can select one of these keys to be used in the Secret Asset. Click OK to confirm your choice.

The key is then added to the Secret Asset (1). We are now ready to add Secrets (2)

Click on Add a Secret to create the first Secret.

The Property name will be filled with a default (1). You can enter the value "password" (2) or whatever your secret value is. The entry will be obscured, unless you click the eye to the right of the field. In that case the entry will be clear.

No clear text with Cluster key-pair

Because the UI does not itself store complete key-pairs, but only the public-key part, it is important to know that once you closed and reopened the Project, you cannot view those Secrets in clear text which rely on a key-pair coming from a cluster.

# How to use Secrets

Once Secrets have been defined as part of a Project, the question then is, how you can use them.

The way to use Secrets is similar to how to use Environment Variables. Let's say we have three Secrets "username", "password" and "url":

We can then use them in a JDBC Service Asset like this:

Secrets can be referenced by ?{sec:<property-name>}. This is similar to how Environment Variables are referenced, except the prefix is "sec:" instead of "lay:".

layline.io is internally using the StringSubstitutor method which provides additional functionality. You can learn more about it here (opens new window) under section "Using Interpolation".

Secrets are explicitly deployed together with Workflows etc within the "Deployment Configuration". We distinguish between deployment of Secrets which have been

# A. Deployment of Secrets with same key-pair as Cluster

Let's look at an example:

We have configured a Project and in that we create a Deployment which includes a Workflow "FileMapping" together with an "My-Secrets" (1) with a fingerprint "fpX". 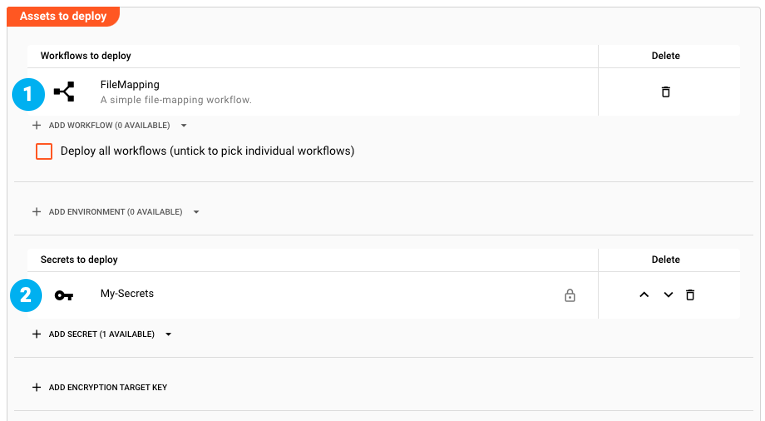 We then execute the Deployment, which means compiling it and transferring it to the Cluster.

Then this is what happens: 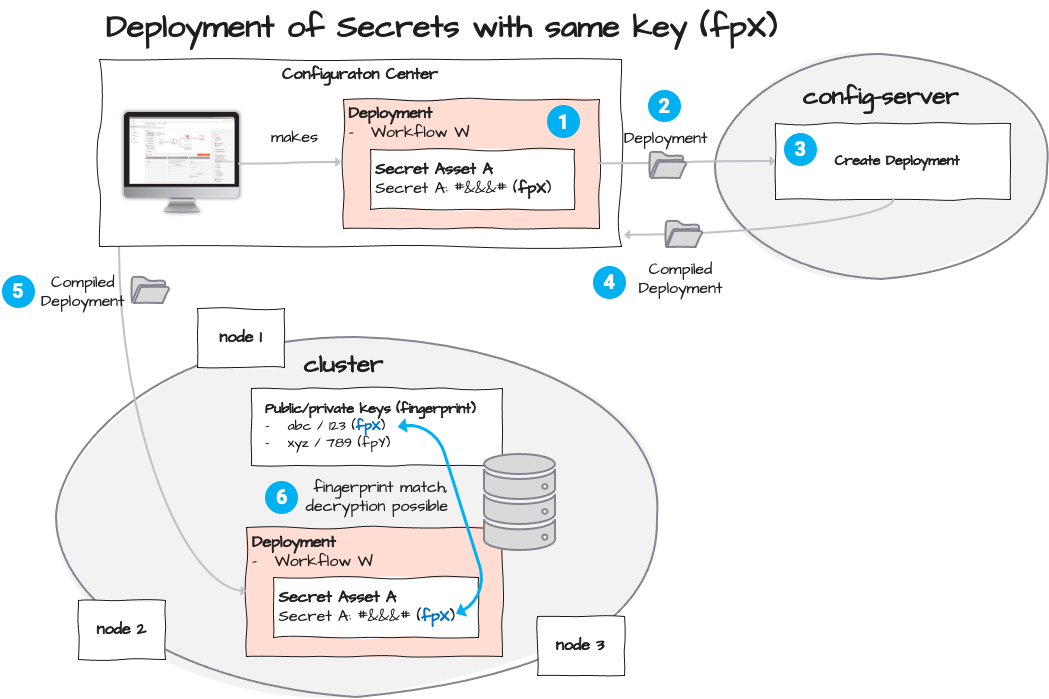 # B. Deployment of Secrets with the same key-pair as on the Cluster

There may be Projects which contain Secrets which have been encrypted with a key-pair unknown to the target Cluster. This can happen for example if you receive a Project from someone else who is using a different key-paid, or if the keys which are used during development are simply not the same as on the Cluster (maybe for security reasons), just to name a few examples.

In this case, the Secrets need to be translated to match an existing key-pair on the Cluster.

We can now instruct layline.io via the Deployment to translate the keys to that of the Cluster: 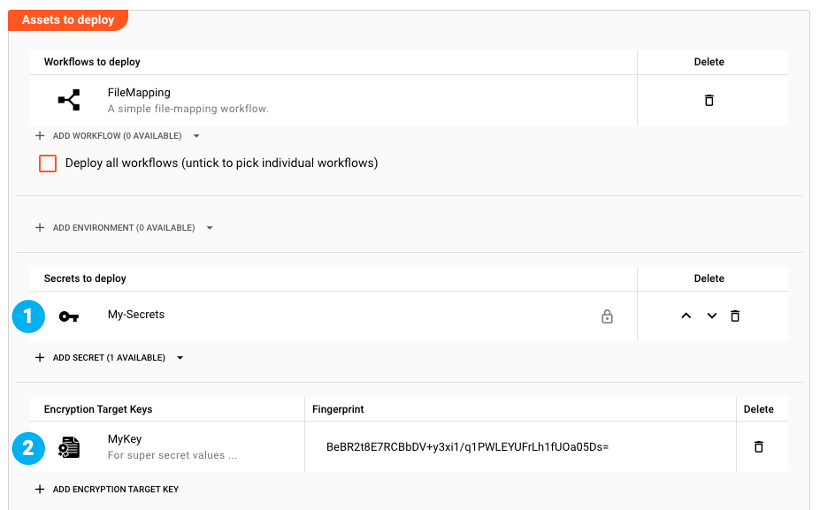 We have our Secrets to deploy in (1). We can then select "Encryption target keys" in (2). The Secrets we deploy in (1) will all be re-encrypted with all target keys selected in (2) upon deployment: 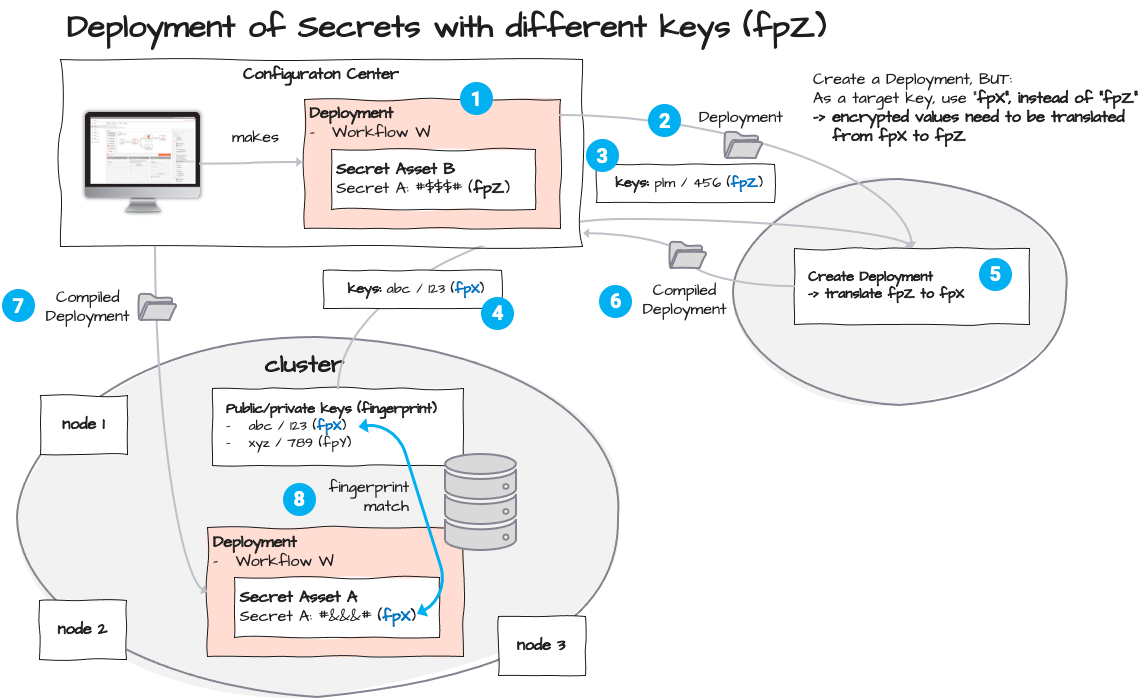 This technique is used when the key-pair on the Cluster is not accessible by anyone who is configuring a Project. Private keys therefore are never exposed in the Configuration environment. Only users with respective access privileges can retrieve or change those keys on the Cluster.

# How Secrets are decrypted during execution

Encrypted Secrets are being sent to the Cluster as part of a Deployment (see above), which in turn contains one or more Workflows (1). Workflows may reference Secrets (2). The matching key to decrypt these Secrets is identified by the given fingerprint (fpX) In the course of Workflow execution, referenced Secrets require decryption (3). Based on the fingerprint (4) "(fpX)" the system looks up the corresponding private key "123" (5) which is used to decrypt the value "#&&&#" (6), resulting in the decrypted value "password" (7). 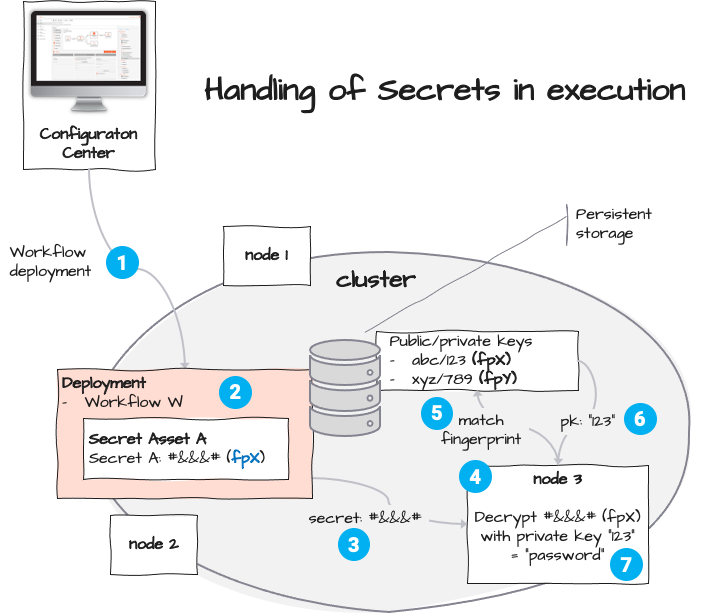 This concept ensures that

To gain access to the private key need to either