To understand what we mean by Cluster, let's take a look at the topology of layline.io.

Clusters are a logical assembly of 1 to n Reactive Engine instances. Each instance lives on a Node. A Node can be anything that runs a supported operating system. So it is either a physical server, a virtual server, a docker image, etc. Please note, a setup with only one Reactive Engine is a logical Cluster as well.

These Nodes and the Engine(s) living on them can be physically and geographically distributed. As said above, a Reactive Cluster is formed logically. All that's necessary is for the nodes to be able to "see" each other (network-wise).

Multiple clusters can be managed from the same Configuration Center/Server. 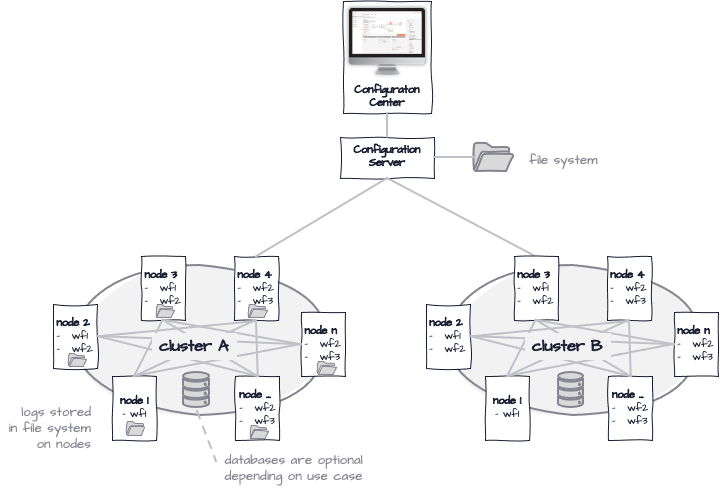 layline.io Clusters have a number of Controllers which provide services to the Cluster and allow monitoring and management of how the Cluster performs. Each Controller has set of tasks that it is specialized in.

This Controller manages the Deployments in the selected Cluster. 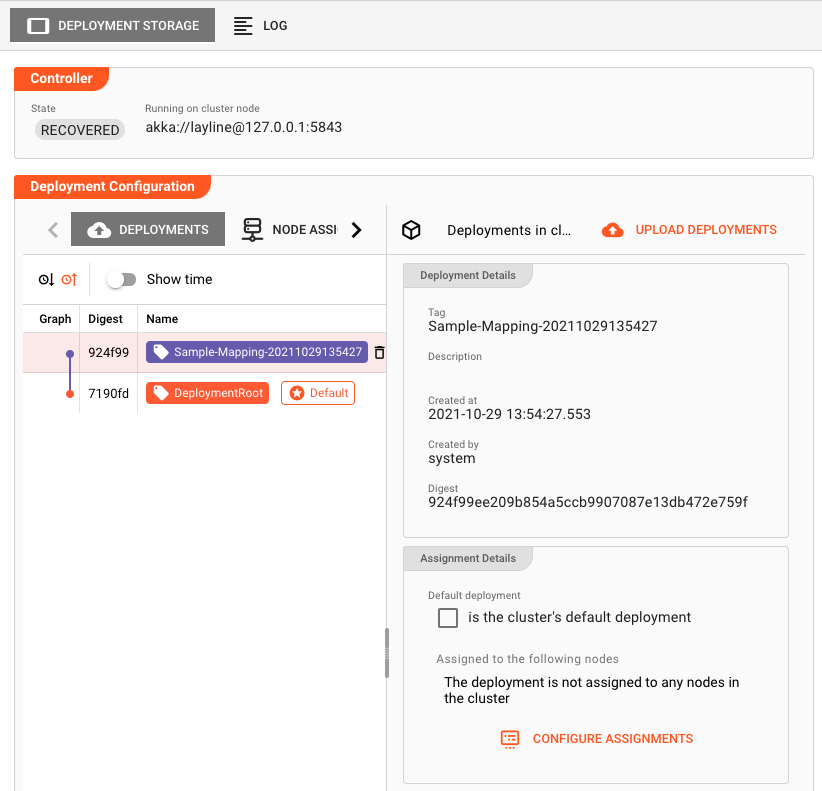 Let's go through the parts:

Shows which Reactive Engine the Controller Service "lives" on in the Cluster. If the Engine fails, the Controller will automatically switch to another available Engine.

# How Deployments are stored

For the next steps it is important to understand how Deployments are stored in a Cluster: 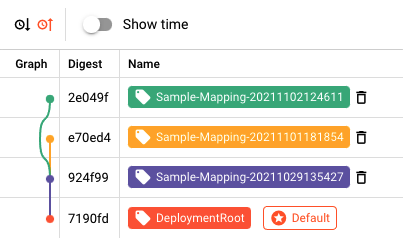 In the above example the both the yellow and green Deployment are based on the purple Deployment. The concept is similar to modern Version Control Systems like Git. layline.io also stores the data in a similar fashion in that it only store the differences from version to version.

The Deployment Configuration gives you an overview over the Deployments which are available on the Cluster, and allows you to operate them. Let's take a look: 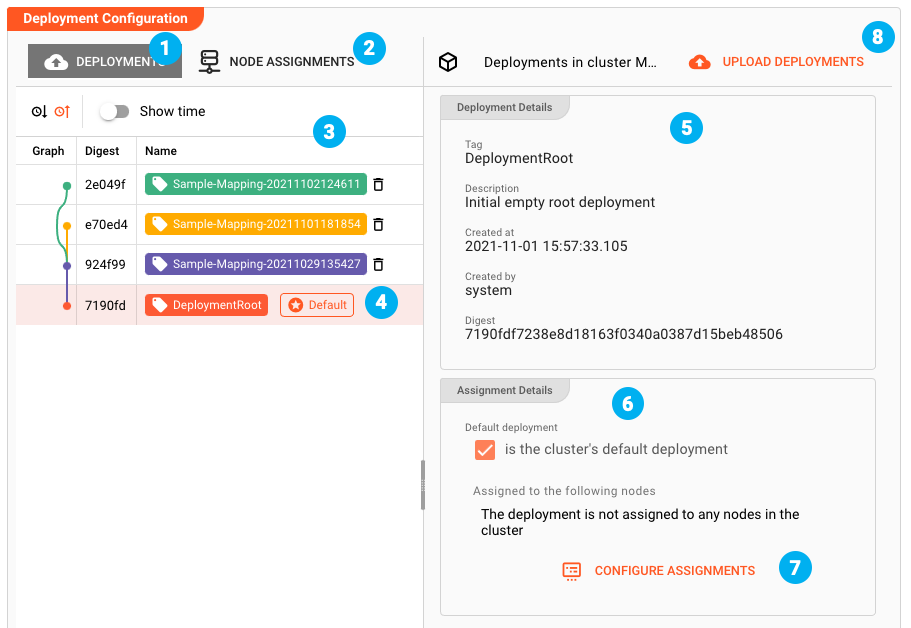 Highlighting a Deployment in the list, details its properties to the right (5).

The Box "Assignment Details" (6) shows which Nodes (Engines) the selected Deployment is currently assigned to.

Node Assignments (1) shows which which Nodes run which Deployments. In our example there is only one Node. This Node was directly assigned the displayed Sample-Mapping Deployment (2).

This action is something which is used commonly to start and stop a Deployment. Read carefully.

Deployments are activated by

In many cases (if not most) one Cluster will only run one Deployment at a time, and do so on all available Reactive Engines.

This simple action will activate the selected Deployment on the whole cluster.

You can activate a Deployment on a selection of one or more Nodes, instead of the whole Cluster.

In the dialog that opens, you can assign the Deployment to one or more available Reactive Engines. If you want to assign it to all Engines, you can just make it the default (see above).

One Deployment per Engine

To remove a Deployment from a Cluster, click the trash can next to the Deployment name.

You can only delete Deployments which are not active. It is also not possible to delete the "DeploymentRoot".

As explained here a Deployment can be written to a file. To install this Deployment on the Cluster you can select Upload Deployments (1):

A upload dialog will open. You can add the Deployment file through the "+" sign (1) or via drag and drop (2).

Upon successful upload (1) the dialog will expand to show the meta data of the Deployment file under "Contained Deployment Tag and Description". 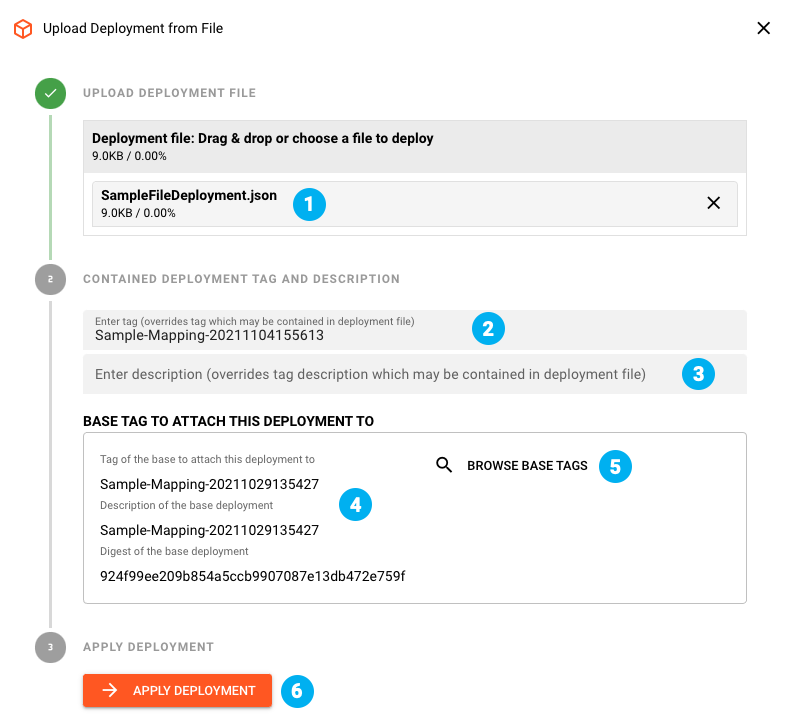 You can override the Tag name (2) as well as the Description (3). Remember that that the tag name must be unique to the Cluster.

The box (4) shows the base Deployment that this Deployment will be attached to. It is filled with the Deployment which was pre-selected by you when you clicked on Upload Deployment before.

You can change the base Deployment by selecting it from Browse by Tags (5).

Shows which Reactive Engine the Controller Service "lives" on in the Cluster. If the Engine fails, the Controller will automatically switch to another available Engine.

# How Workflows are "scheduled" (scaled) in a Cluster

A Workflow "W" (1) is deployed onto a Cluster of Reactive Engines running on 6 Cluster Nodes (2). We have "scheduled" this Workflow "W" to run 12 times (3). This means running the Workflow 12 times in parallel. Because Node 2 is a stronger Node, we set a target number of instances there to be 3 (4). Node 1 is a weaker Node so we only want the Workflow to run a maximum number of 1 (5).

As a result, the layline.io Reactive Cluster will balance the 12 instances across the 6 Nodes as shown in the image.

If we request additional instances, they will be balanced out across Nodes 2 to 6. Node 1 will not be considered because it has a "Max. Instances" setting of one (5).

A "Schedule" means the plan, of

The "Scheduler Settings" display the current settings and support you in adjusting them. 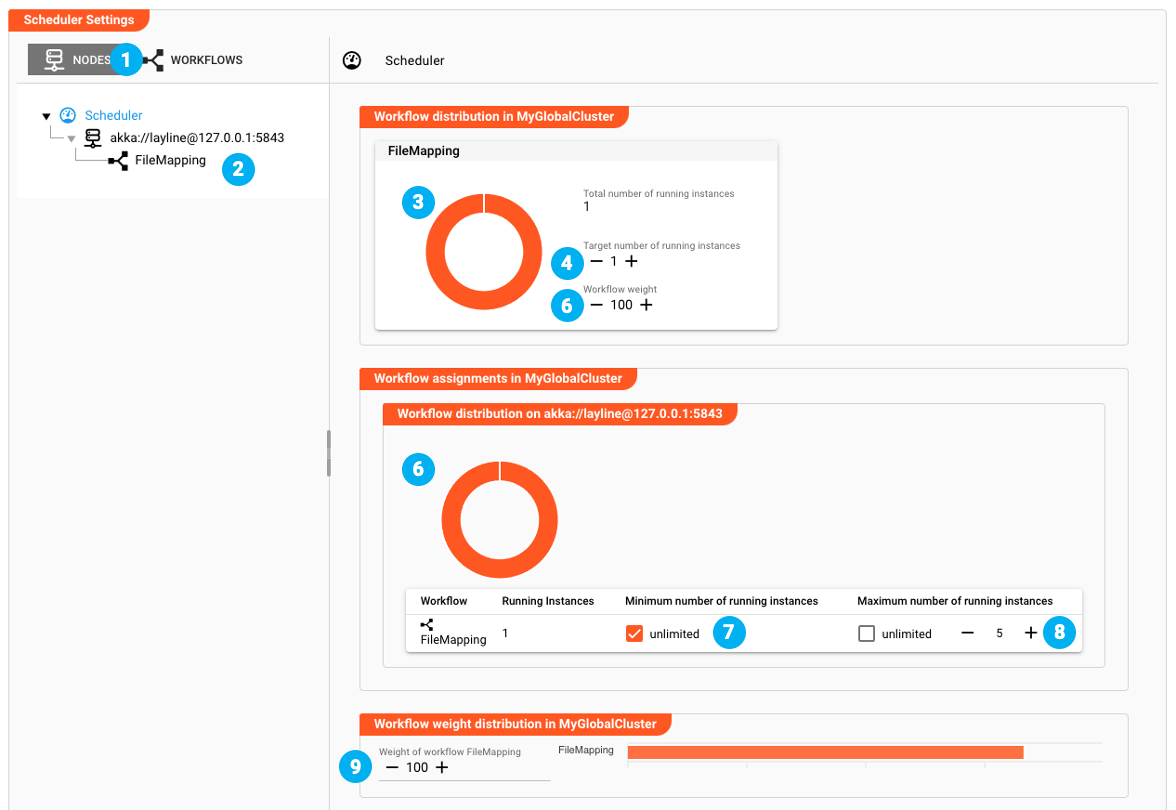 There are two tabs Nodes and Workflows in the Scheduler Settings (1). The Nodes tab shows a tree view prioritizing Nodes and their Workflows, while the Workflows view reverses this from the perspective of the Workflows.

In the above image there is only one Node and Workflow configured, but it works the same way for multiple Nodes and Workflows.

Selecting the "Scheduler" Node in the tree will give you an overview over all Nodes and Workflows. Selecting the Workflow itself ("FileMapping") will only show you the settings of this Workflow on the given Node ("akka://layline@127.0.0.1:5843").

Let's look at the Scheduler Overview (all Nodes and Workflows): 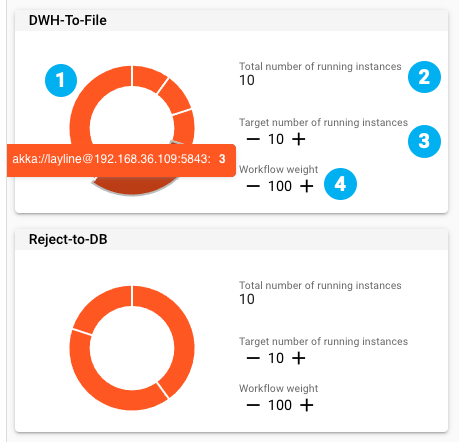 We can adjust the "target number of running instances" (3) through the +/- buttons. Increasing the number to 12 for example will instruct the Cluster in real-time to increase the number of this Workflow to 12. If no maximum or minimum number of instances per Node have been defined, the Cluster will itself balance on where to run the additional two instances of this Workflow. This will be mirrorred in the display wihtin a few seconds.

Running Workflows are competing for available resources. We can therefore assign a "weight" to a type of workflow to be considered across Nodes in a Cluster. The weight will then be taken in to consideration when the Reactive Cluster manages the balance between Nodes.

The following images shows how the Workflows are distributed across the two Nodes.

The "Total Weight" on each Cluster Node is then "200" (3) on Node 1 and "150" (4) on Node 2 respectively. Unless there are other restrictions (e.g. max instances per Node), layline.io will balance Workflows across available Nodes so that the total weight per Node is as evenly distributed as possible.

Let's see what happens when adding another instance 7 of Workflow A:

layline.io - having the choice on where to mount instance 7 of Workflow A will always opt for the Node which will lead to the smallest total weight difference between all available Nodes.

Please note, that differing weights have no impact in single Node clusters.

"Workflow Assignments" shows how Workflows are assigned on a per Node basis.

This is essentially an overview of all weight distributions of all workflows. Changing the weight here (1) is the same as changing it above.

It supports you in:

Sources (2) are data sources which deliver data to layline.io. This could be dynamic sources like File- or Service-sources.

Resources (3) are Sources and Sinks which are static and limited in nature. A great example is a partitioned Kafka topic with a fixes number of partitions. Each partition can then be reserved and released as required. If all partitions are reserved, the resource is depleted until released.

On the Access Coordinator section you can see whether all moving parts are operational. In our example we see:

This is where you can view and manage processed Sources. In the example below we do have 8 Sources (1). Sources displayed here, wil be recognized as having been configured as part of a Workflow.

Selecting a Source will display it's processing history (Files in our example to the right). It is possible to then filter the Sources by name, or by their processing state.

The Cluster keeps track of all processed Source items (6). It will not process them again, unless they are removed from the Sources list.

We may want to remove an item from the processing history of a given Source so that we can reprocess the item. In case you are wondering why a reprocessing may not work when you resupply the item to the source, there is a good chance that layline.io still recognizes this item as already processed and will therefore ignore it.

To remove the item select the it from the list (6) and then click Reset selected. To delete the complete list, select Reset all. If you then resupply the item you deleted from the list, it will be reprocessed.

On the left is the list of individual Resource Groups. Again, selecting an entry (4) will display the details on the right. In the example below you see that the selected Resource Group is a Kafka topic separated into 10 partitions. You can see partitions 5 and 6 are currently reserved (5). The other partitions are not occupied at the time.

To free up a resource you need to select it (5) and click Revoke selected (6). Click Revoke all (7) to reset all partitions in this example.

To learn how to manage Users, Roles and permissions within layline.io, please check Operations User Storage for user management on the cluster, or .

layline.io by its nature is destined to connect to a multitude of systems and APIs which are usually protected by security mechanisms --> the "Secrets". These Secrets can be very sensitive in nature. But when working with such Secrets, there are always some risks in them being exposed, especially in Software and Configuration Projects where Secrets may end up in clear text more often than not, for lack of better mechanisms. Examples:

The only valid answer to address these challenges is that Secrets must be truly secret as early-on as possible in the process. Public/private key-pairs support a model in which Secrets can be encrypted by anyone, but only decrypted by the private-key holder. layline.io embraces this model to take care of Secrets and ensure that the exposure of Secrets is kept to a minimum.

Ultimately, the question is how exposure can be minimized and how layline.io addresses this.

Potentially, these Secrets may not be exposed to everyone working on the Project, but only to a select few individuals. So the question naturally is how to deal with these Secrets A Secret shall be defined as a key-value-pair of a name and the secret value. Not everybody working on a Project configuration shall be able to view or change secrets