A "Deployment" is a collection of

which are being "deployed" to a Cluster of Reactive Engines. As you can tell, it is not a Project which is being deployed, but a selected subset of the Project's Assets (which could end up being everything in the Project, however). 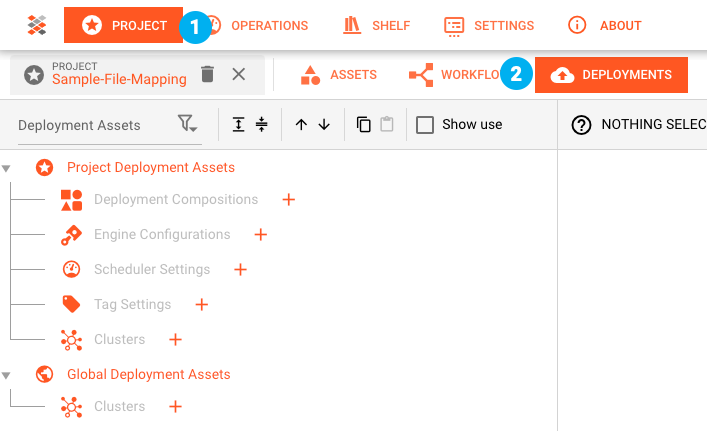 A "Cluster Asset" resembles one or more Reactive Engine endpoints which can actually receive and then activate a Deployment. Therefore before we can deploy, we need to define what these endpoints are.

It is possible to create a Cluster either in global scope or Project scope:

We create a Cluster in the Project:

Our Cluster consists of one Node ("http://localhost:5842") which is the one Reactive Engine running on our local machine.

How a Deployment is distributed in a Cluster

Therefore in the Cluster Asset which we define at this stage we only define the Nodes which shall be able to receive a Deployment, not necessarily all of the Nodes in a Cluster (this can also be a dynamically growing and shrinking number of Nodes based on load).

A "Engine Configuration" is a collection of

which can be deployed together in one go. 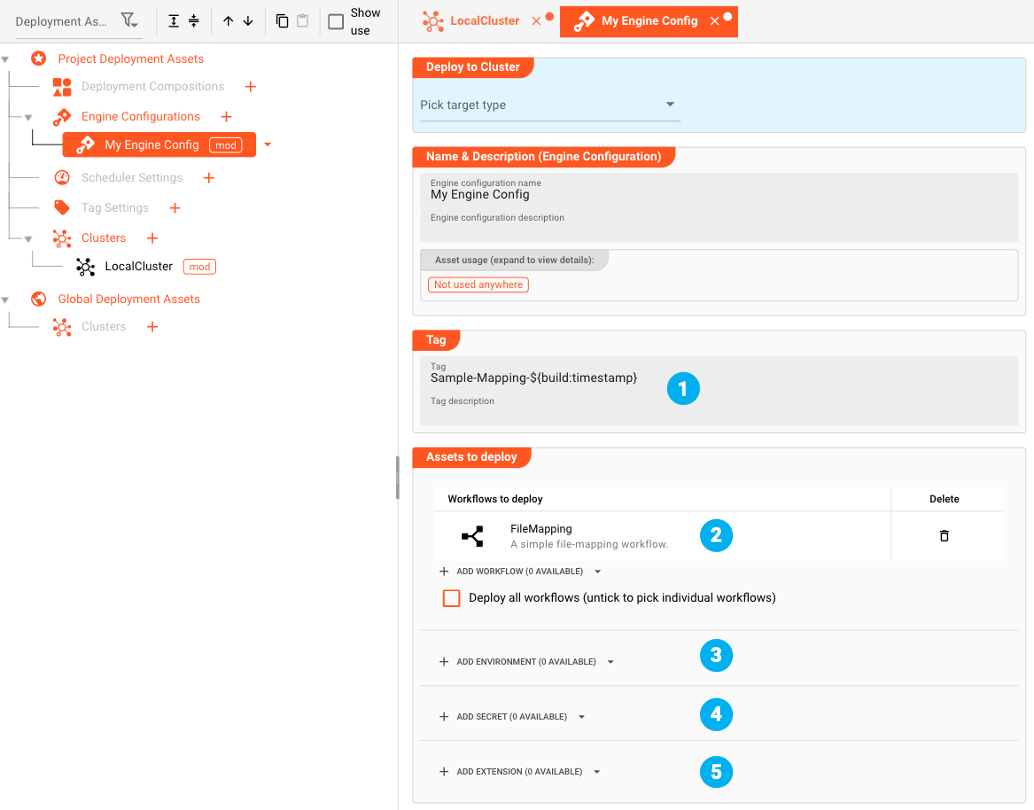 Trying to deploy a Deployment to a Cluster with a tag which the Cluster already knows (duplicate), will lead to an error.

The minimum configurations for the deployment to the local Reactive Engine are completed. We can now deploy to the Cluster.

As the Cluster runs independently, it has its own security barrier. In case you are not logged in yet, you will be asked now: 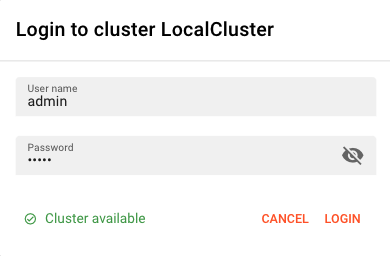 The default login here is also "admin/admin", just like with the Configuration Server. Press "Login".

Check that the Cluster is running and reachable

Make sure it says "Cluster available" at the bottom of the login dialog. If not, then your Cluster Configuration is incorrect, or the Cluster cannot be reached (Reactive Engine may not be running, Network issues, etc.).

The system will try to 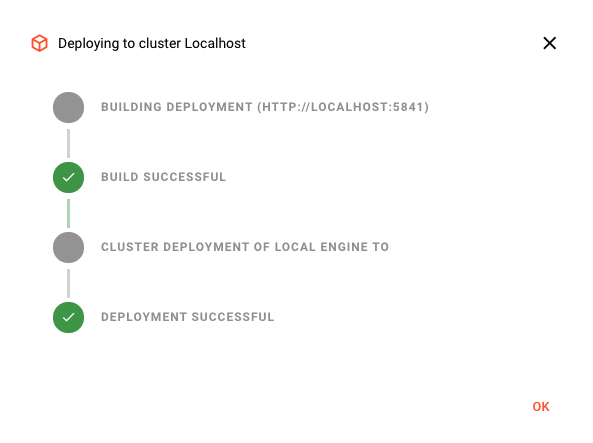 This signals, that the Deployment was successful.

To check, we switch to the Operations --> Cluster Tab. Select the correct Cluster (1). 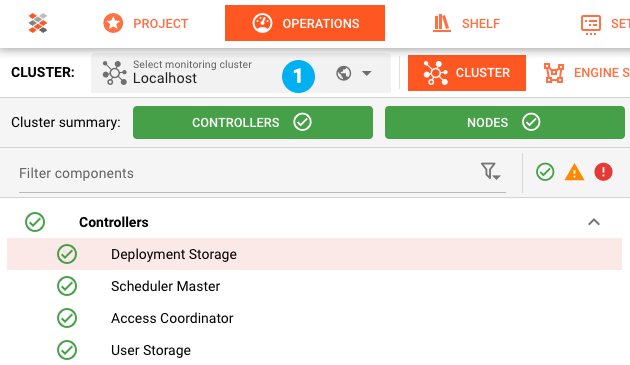 The "Operations" Tab let's us see what's going on on Clusters. It's also possible to perform necessary operations from here. You can select the Cluster from the drop-down box at the top of the Tab.

On the left-hand tree, select Controllers --> Deployment Storage. There we can check our recent Deployment (1): 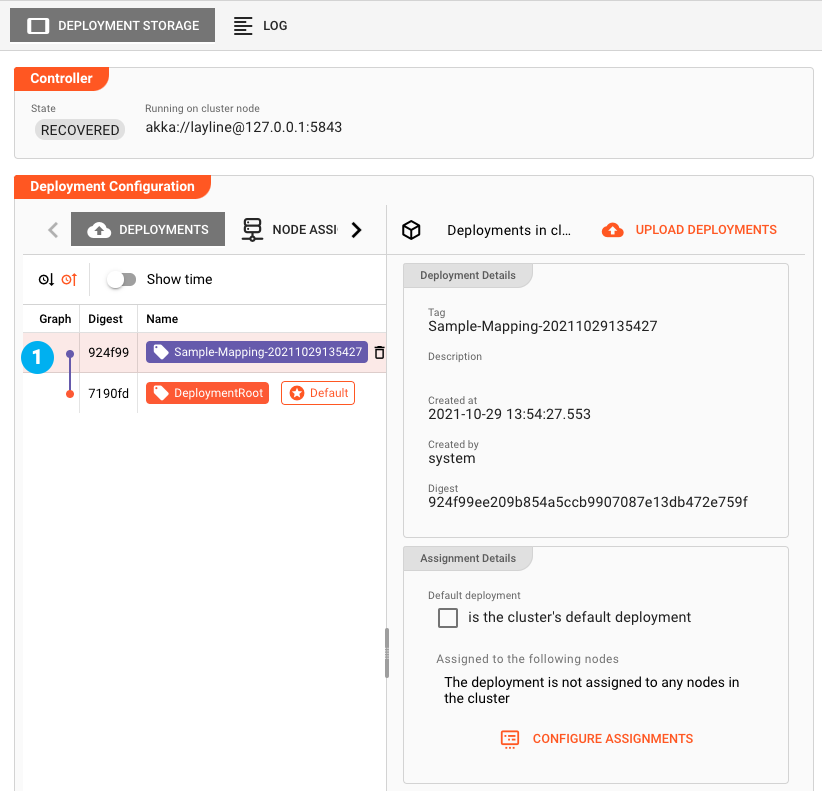 Instead of deploying directly to Cluster, you may want to deploy to a File instead. This is useful, if you want to exchange Deployments asynchronously. A good example would be to transfer a Deployment to another Cluster outside of current reach, or simply to send a Deployment to someone else via email.

To deploy to a file select Write to File (1) from the "Deploy to Cluster" box. Enter a path and filename where to store the Deployment file (2).

The Deployment will be stored in a JSON-file which can be used for upload in a Cluster.