Defines input parameters to ingest data from a Kafka topic.

This Asset is used within a Workflow definition.

You need: A defined Format

Name : Name of the Asset. Whitespaces are not allowed in the name.

The Asset Usage box shows how many times this Asset is used and which parts are referencing it. Click to expand and then click to follow, if any.

An input processor can only have one output port from which it sends ingested data downstream in the Workkflow.

A port can have a name and description. Names must exist and be unique within the processor.

Using termination settings you can control how layline.io should behave upon shutdown of a Workflow that this Asset is part of. A Workflow shutdown at most goes through three phases:

Data written to a Kafka topic must be written in a format which must have been defined by you previously.

If you have defined such a format, then you can select it from the list of available formats by clicking on the button next to the field (1).

You need to assign a Kafka Source. The Source defines which topics can be read from. The Source must have been previously defined.

Select the Sink by clicking on the button next to the field (1).

In the Kafka Settings section, you define how you want to read data from Kafka topic(s).

This allows you to define what to do when there is no initial offset in Kafka or if the current offset does not exist any more on the server (e.g. because that data has been deleted):

You can read more about this in the Kafka Documentation here (opens new window).

Define one or more topics that this input processor should read from. If you have defined a consumer group then the topics which you define here will be accessed with the same consumer group. You can use ${...} placeholders to expand variables defined in environment variables.

The commit mode defines how the system should commit successful reads and processing back to Kafka. There are four options:

Processed messages will not be committed back to Kafka. This is likely not desired as it is imperative to have control over what messages were suceessfully processed in order to avoid duplicate processing as well as ensure that all messages are being processed. The option is included for completeness nonetheless.

In the Auto Commit Mode, messages are being committed in frequent time intervals. I.e. regardless of processing status, the offset of messages which have been read is being committed every 5000ms (example).

The SavePoint commit mode has no equivalent in Kafka. This actually represents "no commit, until explicit commit". There are mechanisms within layline.io which allow to trigger a so called "upstream savepoint" based on certain conditions. If such a savepoint is triggered, this is then propagated back up. In this case the then current offset will be committed back to Kafka. 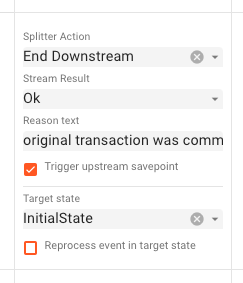 The Message Mode commits the read offset back to Kafka based on time and number of messages. 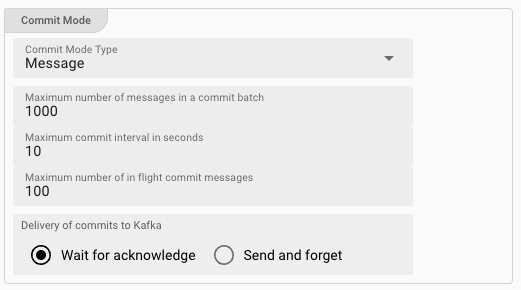 Finally we have to define what should happen to the complete stream in case a problem is discovered. We have two options here:

The complete stream processing will be rolled back, as much as this is possible. This includes, for example signals to rollback database actions (DB rollback event issued), as well as deletion of temporary files. Respective log messages will be generated to further analyze the cause of the issue.

When setting to Retry Stream, the system will retry a failed action for a configured amount of times and in configured intervals.

Can't find what you are looking for?

Please note, that the creation of the online documentation is Work-In-Progress. It is constantly being updated. Should you have questions or suggestions, please don't hesitate to contact us at support@layline.io .